Disabled people receiving state benefits have been hit with a million sanctions in less than a decade, according to alarming new evidence that they are being discriminated against by the welfare system.

A comprehensive analysis of the treatment of unemployed disabled claimants has revealed that they are up to 53% more likely to be docked money than claimant who are not disabled. This raises serious concerns about how they and their conditions are treated.

The findings, from a four-year study by academic Ben Baumberg Geiger in collaboration with the Demos thinktank, will cause worry that a government drive to help a million more disabled people into work over the next 10 years could lead to more unfair treatment.

Sanctions – the cutting or withholding of benefits – are applied as a punishment when claimants infringe the conditions of their payments by, say, as missing appointments or failing to apply for enough jobs.

While the sanctions regime has been championed by the government as a means of encouraging people to take a job or boosting their chances of finding one, most experts consulted as part of the Demos project concluded that conditionality has little or no effect on improving employment for disabled people. There was also widespread anecdotal evidence that the threat of sanctions can lead to anxiety and broader ill health.

The study found that disabled claimants receiving jobseekers’ allowance – given to people who are out of work – were 26-53% more likely to be sanctioned than claimants who were not. Those hit by sanctions reported that the disparity arose because jobcentre staff failed to take sufficient account of their disabilities.

However, a spokesman for the Department for Work and Pensions said it did not recognise these figures: “If someone has a health condition, we work with them to reduce what they need to do, and people are always supported to meet the requirements of a tailored claimant commitment, which they agree with their work coach. This sets out what is expected of them in return for the support they will receive. Sanctions are only used when someone has failed to meet these requirements without good reason – this is in a minority of cases and people are given every opportunity to explain why they have failed to do so before a decision is made.”

The new study found that more than 900,000 JSA claimants who report a disability have been sanctioned since May 2010. People who claim a different benefit, employment and support allowance, and have been placed in a work-related activity group – which requires them to attend jobcentre interviews and complete work-related activities –can also be sanctioned. The research found that more than 110,000 ESA sanctions have been applied since May 2010.

The findings have caused alarm among charities, many of which have dealt with cases in which disabled people complained of poor treatment and a lack of understanding.

Mark Atkinson, chief executive at disability charity Scope, said: “Punitive sanctions can be extremely harmful to disabled people, who already face the financial penalty of higher living costs. There is no clear evidence that cutting disabled people’s benefits supports them to get into and stay in work.

“Sanctions are likely to cause unnecessary stress, pushing the very people that the government aims to support into work further away from the jobs market.”

Polling for the Demos project found that while the public often supported the imposition of sanctions for disabled people, they did not back the way in which they were applied in practice.

A majority thought that disabled people’s benefits should be cut if they do not take a job they can do, but they were less supportive of sanctioning for minor noncompliance, such as sometimes turning up late for meetings. Even those who supported sanctions preferred much weaker punishments than those the government uses.

The research recommends a reduction in the use of so-called “benefit conditionality” for disabled people and a strengthening of the safeguards to ensure disabled people are not unfairly punished.

Polly Mackenzie, director of Demos, said it was now clear that the benefits system isn’t working for disabled people: “Conditionality is important in any benefits system, but when disabled people are so much more likely to be sanctioned, something is going wrong. Jobcentre advisers and capability assessors too often have a culture of disbelief about disability, especially mental illness, that leads them to sanction claimants who genuinely could not do the job they are being bullied into applying for.

“We need to think again about how we assess work capability. Employers also need to be better at adapting to disabled people’s needs so that more jobs can be done by people with fluctuating conditions.”

This follows a damning report by the National Audit Office in 2016, which found that there was no evidence that sanctions were working. It also found a failure to measure whether money was being saved, and that the application of sanctions varied from one jobcentre to another.

‘There’s no room for compassion’ 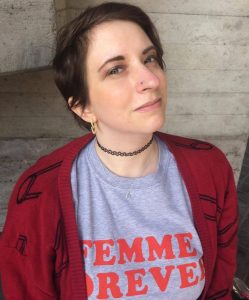 Nina Grant has Ehlers-Danlos syndrome, a genetic collagen defect that causes chronic pain, fatigue and frequent joint injuries. She was sanctioned in 2016 after she informed the Department for Work and Pensions that she was carrying out what the department specifically describes as “permitted work” while on disability benefits. “I only found out about the sanction when I checked my bank balance and realised the payment hadn’t gone in as usual.”

After she complained, her benefits were reinstated. “They didn’t apologise. They didn’t offer any explanation. If I hadn’t called them, it could have gone on for months. It made me feel like I was being punished for trying to contribute while disabled, and scared that they were going to use that as an excuse not to pay me.”

The Londoner is reliant on a wheelchair outside her home, and finds it extremely painful even to use a pen most days. “I understand that people exploit the system, but this government treats disabled people with utter contempt.”

Ten years ago Josie Evans was working as a nurse when she suddenly went into anaphylactic shock. After 41 further life-threatening attacks, she has been diagnosed with idiopathic anaphylaxis, which means she is extremely allergic to more than 100 antigens and triggers.

She relies on disability benefit to pay her rent and buy food but was sanctioned in 2016 after failing to send in a form on time: “The document was 20 pages long and I was in too much pain to write, because my hands were swollen from a recent allergic reaction I’d had.”

She explained this and was told she could take her time. Ten days later, a letter arrived from her landlord saying her housing benefit had not been paid. She discovered all her disability benefits had been stopped because the form had been late. “I was scared. I knew I’d need to buy food in the next 48 hours, and I can’t use a food bank because of all my allergies.”

It took weeks for her benefit to be reinstated, and she had to borrow money from her family. “It was so stressful it brought on an allergic attack. The people who work at the DWP simply do not understand the reality of what it’s like to be disabled. There is no room for compassion.”