The government used to distribute discretionary emergency loans and grants to cover urgent cases of financial hardship. In April 2013 responsibility for the support, which the NAO described as “vital”, was transferred to local authorities and rebadged as ‘local welfare’.

The removal of the dedicated welfare grant left councils feeling government funding for local welfare had effectively “ceased”, the NAO found. Coming on top of a 37% real terms reduction in central government core funding for councils between 2010 and 2015, the situation meant at least 10 of the 152 English councils had stopped or significantly cut welfare support.

Amyas Morse, head of the NAO, said: “Councils provide discretionary local welfare support, but increasing numbers are stopping doing so, and less is being spent overall now than in 2013.

“The consequences of creating this gap in provision are not understood, either in terms of impact on vulnerable people or of creating potentially costly additional care or medical needs in the longer term.”

Responding to the report, councillor Claire Kober, the Local Government Association’s lead for resources, said the government’s removal of separate money for local welfare assistance left councils trying to provide the support within existing budgets at a time of “huge financial challenges”.

“For some councils, providing crisis payments to those in need from local budgets is likely to be a stretch too far. Without additional funding, there is a real risk that many will be unable to afford to continue to run their local welfare schemes or will have to scale them back significantly.”

Overall funding for discretionary crisis support dropped by 42% in real terms between 2009-10 and 2013-14, largely as a result of cutbacks in central government spending in the years before responsibility transferred to councils, the NAO found (see graph below). 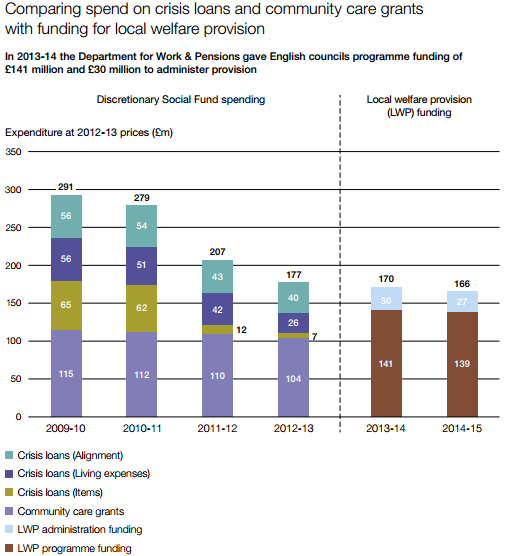 When local authorities took on the duties they often limited support due to being uncertain about funding and demand.

More than three-quarters of councils (78%) did not spend all the government grant funding they were given for the support in 2013-14. In 2014-15, a quarter (24%) held back funds. Local authorities said the underspends would be used to help provision in 2015-16.

The report found councils most commonly used the payments to provide furniture, white goods, food and fuel support. However, it warned there was no national benchmarking in place, unlike in Scotland, to help make sure funding was being used as cost effectively as possible.

The report also warned poor coordination between the local and national welfare systems, had led to “inappropriate” costs being shifted to councils. Local authorities said a significant proportion of local welfare provision were from people facing hardship as they experienced benefit sanctions or delays. The situation risked “undermining the government’s welfare policy objectives”, the NAO concluded.